Following on from this week’s PS3 firmware update to 3.56, we are hearing numerous reports that some Call of Duty players have been affected as a result of Sony’s system update – but not in a good way.

As reported from Ripten, it looks like Sony and Activision are definitely not messing around any more after recent security loop holes opened up the console, more specifically, left it open for hackers to exploit – using COD Black Ops as their primary target.

It’s clear that Sony had to step in sooner or later, as the hackers had managed to alter leaderboard scores and use glitches within the game to give themselves an advantage over legit players. Sony was very brief in their PS3 3.56 notes, but it looks like they had one eye on Call of Duty as well as the recent attempts to install custom firmware on the system.

Some gamers have been greeted with the following message from Activision upon logging into the Black Ops multiplayer servers: 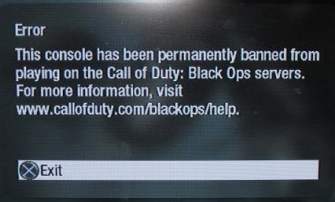 The big debate which is going on here though, is whether Sony is banning innocent gamers by accident, or if they have proof that users have been cheating in the game which has resulted in the permanent ban. This wasn’t occuring before the PS3 3.56 update, so the bans are definitely tied in with Sony’s new security measures.

If you have been banned from the game recently, let us know your thoughts on this. Have you messaged Sony to argue your case, or do you know that you’ve been caught red handed?