When high definition televisions first released it was a natural step improving our displays for gaming, movies, and more. The 3D evolution feels like a cheap step towards virtual reality, and forgetting the so-called medical problems that can arise for certain viewers, the future of 3D seems more like a craze.

After watching a number of movies and playing a few PS3 games in 3D, I find the experience both uncomfortable and with less clarity than playing in HD. The first generation 3D gaming experience seems like a FAD, unlike my first 300:1 plasma TV that felt amazing 7 years ago and is nothing compared to my current Samsung LED. We have not had time to enjoy the high definition experience, and the 3D option has been pushed on us, which looks and feels cheap in my opinion. 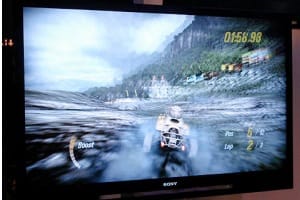 The evolution of 3D displays will need to get to a point where you need no glasses to play 3D games, and feel like you can almost touch the images because they look so clear. Currently the 3D experience feels uncomfortable to watch, and some people have to take the glasses off thanks to the uncomfortable feeling.

Where will 3D be in 2 or 3 years from now? Will your 3D television be sitting next to the HD-DVD recorder? It’s not the first time 3D has been called a fad, and with the possibility of the Wii 2 featuring 3D gaming could this be a short-term sales pitch or will 3D gaming be the ‘next big thing’?

It’s my opinion the powers that be will milk 3D for all they can, and then movies and gaming will move on to the next thing within 2 or 3 years. Surely I am not the only person that feels 3D is a joke?

If they cracked virtual reality, then the gaming market would have something to bite onto, although this too can have its problems thanks to pulling you in way more than 3D could ever do.

PS3 3D Gaming and the possible Wii 2 featuring 3D gaming, I give this craze no more than 3 years. Are you sold on the 3D evolution?