We have spoke in the past about how PS Vita will need to purchase a large capacity memory card if they are planning to adopt a digital approach for Sony’s new handheld system. Now though we have some additional news for those who are not too bothered about owning physical copies of Vita games.

It turns out that PS Vita owners will be given an incentive if they suddenly feel the urge to download a game instantly from the PlayStation Store. Sony has confirmed that there will be a small discount put in place on all digital purchases, but didn’t go into specifics on how high the discount will be.

Luckily for you, this piece of vital info may have already been confirmed via Best Buy. An image uploaded to NeoGaf forums appear to show a 10% discount on all digital purchases compared to the price of physical cards – an example of this can be seen with Uncharted: Golden Abyss listed for $44.99, when usually it has a $49.99 when bought in retail shops.

Obviously the price reduction isn’t amazing, but it is definitely better than nothing. With the variable pricing set in place for all PS Vita games, it gives a great opportunity for smaller developers to put their stuff on the PS Vita store, and we predict that there may be one or two affordable ‘indie style’ gems to try out later on in the year once the Vita has got its feet off the ground in the US.

At the moment, the digital discounts only apply to US consumers, but we’re guessing that Sony will also be making this change across different regions, such as the PlayStation Store in Europe. Since we’re in possession of an Asian PS Vita, we can confirm to you that the discounts also apply on the Asian PlayStation Store. A popular retailer in Hong Kong for picking up games is Play-Asia and right now they are currently selling Uncharted for around $470, which translates to around $60. However, a quick glance on the Asia PS Store on our Vita tells us that the digital version of Uncharted is available to buy for $350, which is much lower than Play-Asia’s price at $45 USD. 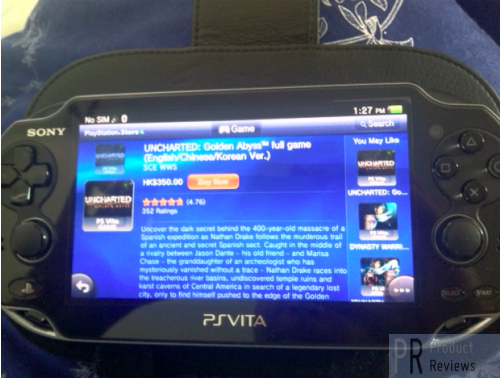 For those of you that are wondering, the Asian version of Uncharted: Golden Abyss is fully in English, so it may be worth keeping an eye on the Asian PlayStation Store in case you spot a bargain compared to other region stores. Variable pricing is also evident on the Asia store too, as Ridge Racer is available to download digitally for $279 ($35), while Play-Asia list the same game for $383 ($49).

Are you pleased with these digital discounts for Vita games, or did you expect pricing to be even cheaper?