The PS Vita may be short of one or two defining games still, but that problem is likely to sort itself out as we progress through 2013. You may have forgotten, but Sony also has two new versions of the PS Vita available – the Cosmic Red and Sapphire Blue editions of the handheld. They went on sale before the end of the year in Japan, and now we’ve just seen them turn up in a Hong Kong retailer. Hopefully this is a good indication that they’re now ready to start shipping in the US and European markets as well.

If you haven’t picked up a PS Vita yet, now may be the perfect time to do so, especially if you enjoy gaming products in alternative colors. Red and Blue obviously stand out a lot more than the traditional Black model and if we had the choice of the three colors at launch, we would have definitely picked out Sapphire Blue as a preference.

So far, we haven’t had an update from Sony on when the two new colors will be available in these shores. They went on sale in November 2011 for Japanese gamers, and now we can confirm that retailers in Hong Kong have started to sell them as well this week. Perfect Denki is one of these retailers based in the Mongkok area and we’ve spotted their advertisement selling the models for $2099 a piece – for the WiFi model.

The Chinese text in the poster indicates that these are in fact Japanese models, but users will be able to go into system settings and change the language to English if they prefer – good news for importers who simply can’t wait to own one. Bear in mind though that $2099 HKD relates to just over $250 USD, which is the price that the US model sells for. It may be better to wait until the models become available here, which shouldn’t be long now that Hong Kong has them. 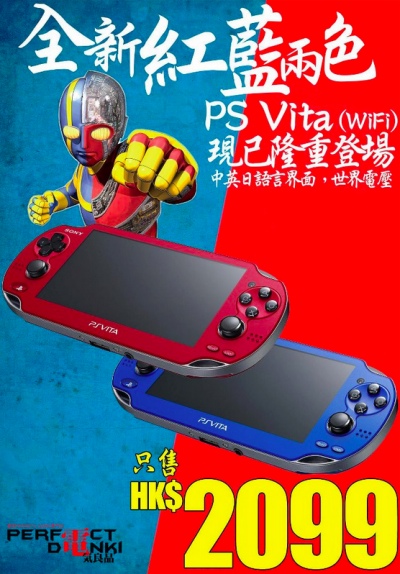 Hopefully we’ll get to the stage where Sony starts to sell these shiny new colors and all other limited edition models at the same time everywhere. It must be frustrating for a lot of you to have to wait several months, even half a year sometimes for the same versions to hit Europe and US after always releasing in Asia first.

Have you had your eye on the Red and Blue Vita models for a long time? We’ll update you when we start to see them appear here.