One of the biggest potentials of the new PS Vita aside from being able to handle near-PS3 quality graphics, is the fact that the Vita has the ability to play simultaneously with the PS3 thanks to its exciting cross-platform play capabilities.

Sony has this week released a brand new trailer showing off some of the cross-platform play features with the PS3, with launch game WipEout one of the main focuses. For those of you that aren’t aware, the game has support for multiplayer battles, either online or locally with players give the option of racing on the PS3 or PS Vita.

It works seamlessly as well, and it means if you are out of the house and hooked up to a 3G or WiFi connection, you’ll still be able to race with your friends who are playing on PS3 at home. Cross-platform is a wonderful feature and we’re a bit surprised why it has taken so long for it to reach a mainstream audience. The good news, is that it looks like Sony are making it one of their key features in marketing both the PS3 and PS Vita, as we’ve already seen other upcoming titles that will have cross-platform support as well. DUST 514, Killzone 3, Warrior’s Lair (formerly Ruin) and LittleBigPlanet to name a few.

While cross-platform play is only just taking off on the PS3 and Vita, one feature which we would have liked to see a little more emphasis on, is Remote Play. We mentioned above that games such as Killzone 3 will be playable on the PS Vita, but if Sony really wanted to make their PS Vita a runaway success, they should have made remote play streaming to the Vita possible for a decent list of titles at launch. 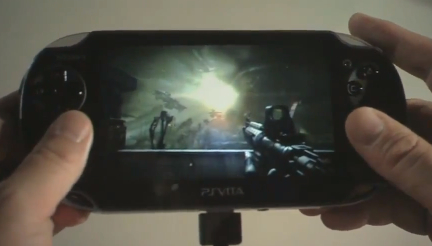 You may remember a recent video which we showed you that unveiled Battlefield 3 and Mortal Kombat running on PS Vita via Remote Play and a hacked PS3 firmware, but it would have been amazing if Sony had support for this official at launch. It didn’t happen though for the Japan and Hong Kong launches, and it looks like it won’t be possible for the US and EU launches either.

We just hope that they are planning to utilize this in the future, as it would be a huge incentive to gamers if they could buy a new PS3 game, knowing that it has support for the PS Vita as well. It’s early days yet though of course, and we are just days away now from the big western launch. If you are planning to get a Vita, let us know your thoughts on cross-platform and remote play features. Would you like to see more focus on these areas from Sony?