It looks like the dreams of a Final Fantasy title releasing on the PS Vita may not be too distant as first thought. So far, there hasn’t been any official announcement of Final Fantasy appearing on Sony’s new handheld, but developers Square-Enix has now hinted this week that it could happen some time in the future.

As most of you know, Final Fantasy Type 0 was the last notable Final Fantasy game to appear on the Sony PSP, after the excellent Crisis Core game which served as a prequel to Final Fantasy VII. The problem that most gamers have with that game is that Square-Enix still hasn’t managed to bring out an Western version for everyone in Europe and US, once again underlying their reputation as a developer who really like to take their time with things.

Having said that, it is usually worth waiting for new Final Fantasy games when they do finally arrive and the thought of an all new entry in the series exclusive to PS Vita is surely worth getting excited about for fans of the series. Hajime Tabata is the director of both Crisis Core and Type 0 on the PSP, and he has recently spoke about his wishes to continue on with a new game for the Vita. 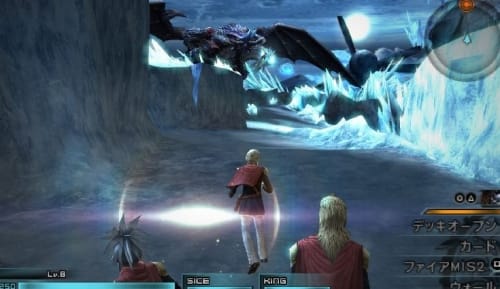 He has spoken about the Vita’s ability to render images in high definition and if a Final Fantasy game does eventually show up on Vita, it looks like touch screen functionality is going to be included as well – Final Fantasy with exclusive touch screen controls definitely sounds good to us.

If you are a Final Fantasy fan, you’ll know that Type-0 was an amazing game, even if it was completely in Japanese. Would you like Square-Enix to continue on with a sequel on the PS Vita, or make a new game completely from scratch? What about a continuation on the Final Fantasy VII universe, exclusively for the Vita?

Either way, it is looking good Vita owners. Let us know your thoughts and suggestions for Square-Enix.