Following on from the big PS Vita 1.80 firmware update that you should now all have, we have once again discovered a few extra hidden features that Sony didn’t mention on their official update notes.

It’s no secret that Sony has being trying to shut down the growing Vita underground scene in which some users have still found a way to access homebrew content and run unapproved applications on the device. It was only a few months ago when we told you that Sony’s own PlayStation Mobile SDK had been cracked open and modified to allow the playback of exciting titles such as Left 4 Dead, Final Fantasy X, Metal Gear Solid and even a GameBoy Advance emulator running Super Mario Bros 3.

Sony has probably seen that and decided that it’s time to bump up security once again after launch. Still haunted by the piracy metropolis on the original PSP, Sony has now made a change in firmware update 1.80 to restrict the use of memory cards and make it a further hassle to gamers when switching cards.

From now on, one PlayStation Network account is going to be locked to one memory card and if you want to change accounts, you’ll have to do a full format. To point out, this wasn’t the case before the update as you could change your PlayStation Network account on the same memory card by restoring factory settings – we thought that was bad enough as it is.

The main point was that restoring factory settings would still keep all of your stored data and games on the homescreen and no format was needed. Sony is changing this to essentially force the move on you to either format your memory card to change account, or buy another memory card to solve the problem.

Like on the PlayStation 3, switching PSN accounts is a good way to ensure that you get your intended share of content updates at the same time as everyone else, for the times when Sony decides to slap European owners in the face by only putting the newest content on the US Store first.

Using the same tactic on Vita has now become much more of a hassle with the 1.80 update, but if you already had a second memory card set up with a different region account, you won’t be affected by this. On a more pleasing note, we do have one positive ‘hidden feature’ to tell you about that Sony also didn’t mention on the Vita system notes or on the Blog. 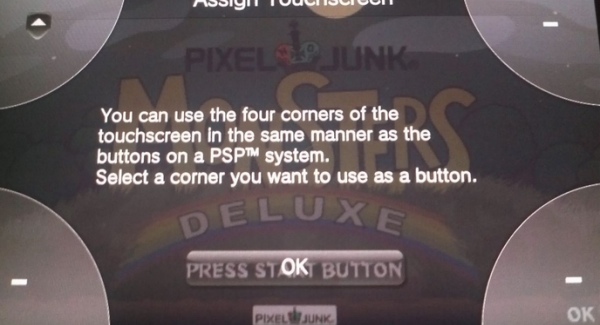 Aside from the PS1 classics support and options to use buttons to control the homescreen, Sony has added an additional feature to allow you to input touchscreen commands when playing your PSP games on the Vita. A screenshot above provided by PSNStores shows you how this works on Pixel Junk Monsters and it will come in very handy indeed when mapping a new touchscreen command to the Vita’s second analogue stick which obviously wasn’t available on the PSP.

What are your thoughts on Sony’s decision to restrict the memory cards further? Are you hoping that they will revert to the PS3 method of multiple account switching in the future, or do you think Sony are planning to take all the measures necessary to prevent piracy on the level of what happened on PSP?