It’s that time again when we look ahead to the PS Plus November 2015 free games on PS4 and PS3. This time, we have another massive rumor to share suggesting that Sony may be planning to give away their next AAA game on PS4.

We can’t say for sure how real this is, but an image has come our way appearing to show that Battlefield Hardline will be free on PS Plus for November.

It’s important to note that this is just an image though, which anybody with basic skills could photoshop. It’s also worth pointing out that last month we had a similar ‘leaked’ screenshot showing Assassin’s Creed 4: Black Flag as the free game – that turned out to be fake. 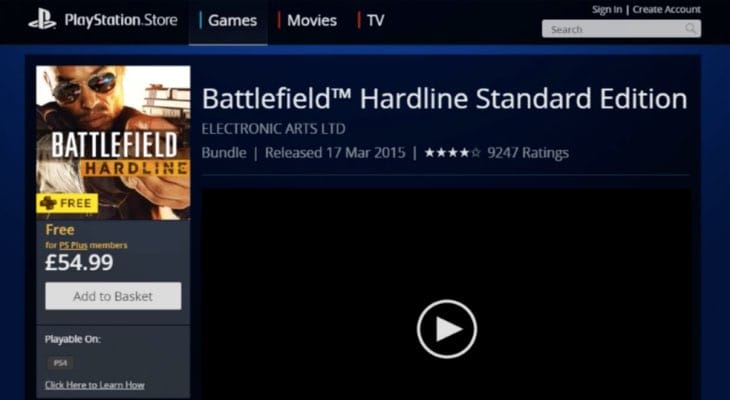 With that in mind, we advise you to take this leaked image with a huge pinch of salt. It would of course be fantastic though if EA has decided to give this game away for free.

We’ve played a lot of Battlefield Hardline and it remains a great game and a lot of fun with the new ‘Cops N Robbers’ style theme as opposed to military warfare from previous Battlefield games.

Moving on, what other games can we expect to see? Some of the PS Plus November 2015 predictions for PS4 include Shovel Knight and Professional Lumberjack 2016 – yes that really is an upcoming game.

Some predictions for PS Plus November 2015 on PS3 that we have seen are Monster High: New Ghoul in School – perhaps a long shot, but November is going to be a month filled with major AAA releases.

The games mentioned above do not fit into the AAA category, so if Sony are planning to give users more ‘smaller’ or indie games they may have a difficult decision next month.

Let us know your thoughts on the upcoming PS Plus November 2015 lineup on PS4 and PS3 – would you love to have Battlefield Hardline included for free or not?

Update: We’re now hearing that the PS Plus November 2015 announcement will be coming ‘mid-week’, so not long to go. Final predictions everyone?

Update 2: Has the AAA game been confirmed as Thief for November on PS4? According to the PS Blog in Asia, it appears so! Give reaction below as we await US confirmation.