With the PS Plus November update release date expected to go live on November 4, we are counting down to a reveal from Sony at any moment. The pressure is on Sony to deliver better games than last month’s offering, but now of course with the extra spice that it is the one-year anniversary of PS Plus.

One year anniversaries are usually met with some beneficial rewards to consumers, as is standard practise in any industry. In terms of PS Plus, gamers will be expecting Sony to offer a AAA game at last as their way of saying thank you to customers for subscribers paying their annual fees.

With this in mind, we are again seeing games such as Knack and Assassin’s Creed: Black Flag being touted as a possibility for inclusion to the PS Plus November games list on PS4. 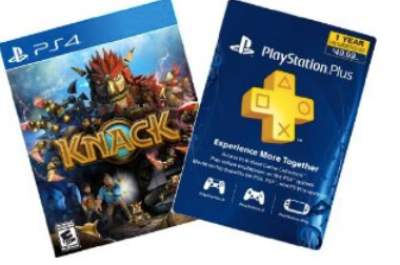 We already know that The Binding of Isaac is going to be included as one of the free PS4 games on PS Plus for November, so we need to know what the other game is going to be.

Sony would win over a lot of fans if they announced that the list would be, let’s say The Binding of Issac, DriveClub PS Plus Edition and a CHOICE between Knack/COD Ghosts/AC4: Black Flag.

To us that would send the message that Sony really cares about their customers, not to mention giving those paying the incentive to subscribe for another year of service after deciding that PS Plus offers more than Xbox Games with Gold.

Do you agree that November is the month when Sony need to deliver on their first AAA game for free? Let us know your last minute predictions for the update and if you plan to subscribe to another year of PS Plus or not.