We are getting closer to the PS Plus February 2016 announcement, with fans anxious to see what will be coming to the IGC next after Sony offered Grim Fandango Remastered and Hardware Rivals last month.

Earlier this month we talked about the possibility of Crypt of the NecroDancer being one of the two free PS4 games for February, since the official release date was February 2 – the same date in which the PS Plus games will go live next month.

However, we can now bring you confirmation that Crypt of the Necrodancer will definitely not be included. Below is a screenshot showing the Twitter exchange between a fan and the developers of the game – confirming that it won’t be free, but it will be a cross-buy game instead between PS4 and PS Vita. 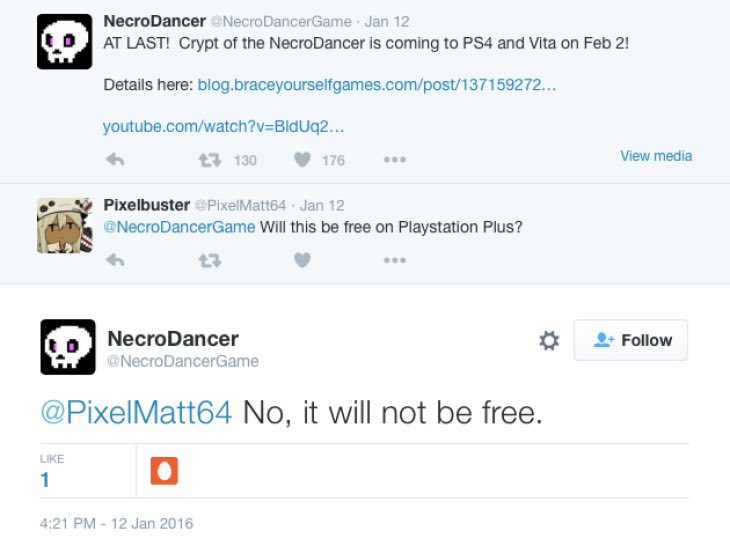 That means the guessing game goes on and hopefully Sony are putting final touches to the selection to get a AAA game added to the list. They know that Microsoft is likely to have another strong lineup due to backwards compatibility, so hopefully we’ll have some good news to share on this soon.

As a paying PS Plus subscriber, can you admit to being disappointed with what Sony has been offering lately? Or are you perfectly happy with the smaller indie games that Sony has picked out each month?

Once we have some juicy information to share, we’ll let you know as soon as possible so in the meantime, leave your predictions below.