We have some great news for PlayStation 3 owners now. Last month we told you that Dishonored was accidentally revealed as one of the free games for PS Plus March 2015, only for Sony to pull the plug at the last minute.

However, now Sony has confirmed that Dishonored is still coming and that it will definitely be one of the free PS3 games for PS Plus April 2015.

The confirmation has been made on Twitter, with PlayStation Europe also apologising for the ‘confusion’ made last month – i.e, including Dishonored in the PS Plus March URL only to steathily change it to a generic one almost instantly. 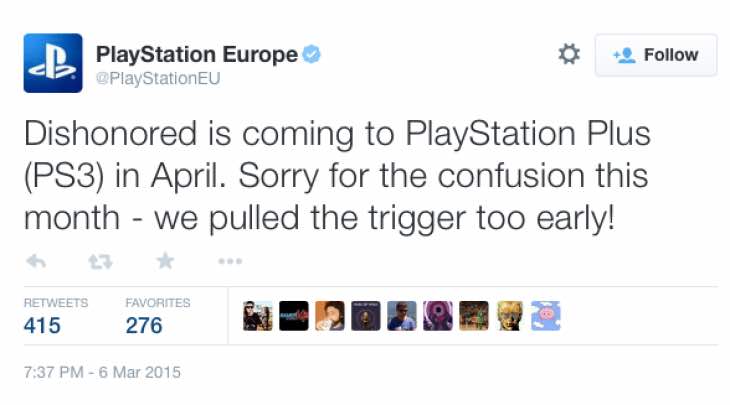 Either way, it’s great to see another AAA game landing in the Instant Game Collection. The game developed by Arkane Studios and published by Bethesda has received multiple awards and currently holds a 89 Metascore on Metacritic and a 7.8 user score which is highly impressive.

How happy are you about Dishonored joining PS Plus, it really is a great game so most of you should be delighted with the confirmation. Let us know what else you want to see on PS4 and PS3 next month, as it looks like Microsoft has started the bragging rights early.