Some online retailers are already selling the new Zenbook Pro UX501, even though it has yet to get its official release date, which we find very strange. Therefore, we advise you to be a little weary, but that does not stop you from doing your homework to see if this is the 15-inch laptop to fulfill your needs.

We have seen several early previews of this new laptop, although there is one that does a far better job at prophesying the Asus ZenBook Pro UX501 review impressions, as it goes into every detail of the upcoming device.

Inherited design and features — If you look closely at this new model it shares a lot in common with the Zenbook NX500, such as its sleek, metallic body, 4K display and impressive battery life. However, several changes have been made as to not be too similar, such as an improved keyboard design and speakers, and that all-important hardware upgrade. 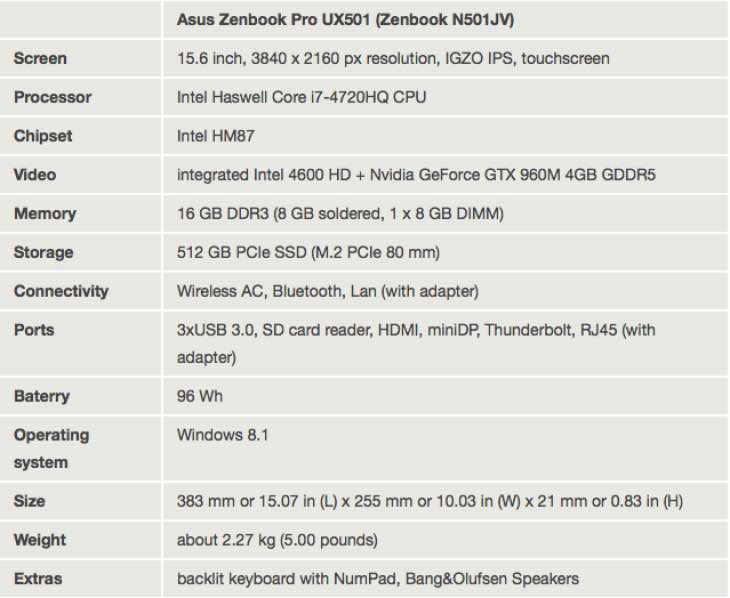 In the pre-review that we came across we are told that it will focus on areas other than performance and battery life, seeing as though their review unit was a pre-production model. However, they will publish a full Asus ZenBook Pro UX501 hands-on review once they have had time with the public release model.

Don’t let that put you off though, as you still get a pretty good idea of what to expect, such as getting up close with those specs, design and features like the new trackpad and keyboard, and the display.

You will even find out what upgrade options are available to you, and the final verdict, which we can tell you conclude by saying this is not a major update, so don’t expect it to be massively different to the NX500.