We already know that Fujifilm is expected to launch the X-T10 camera on May 18th, and just a few days ago we already had a few details, although only some minor ones. However, more news has come to light, and while we have to realize that this is based on mere speculation, the source of the information does have a pretty good track record.

First things first, and that is the expected Fujifilm X-T10 price for the body only, which is said to be between $700 and $800. However, a kit is also expected to be released, one with a 16-50 and 18-55, although pricing for these are yet to become available. 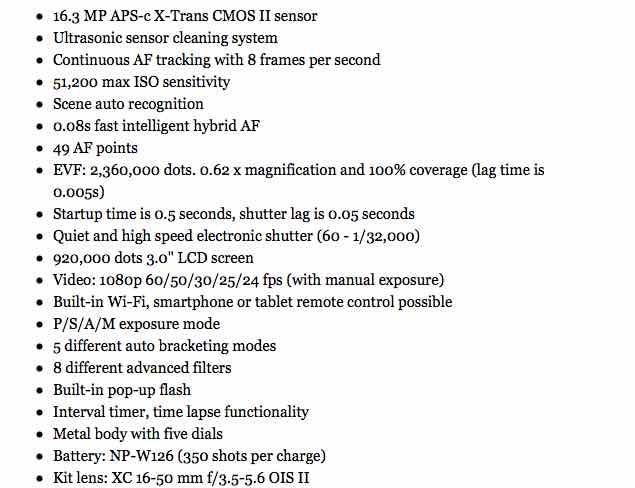 Going back to the camera itself, and the body is expected to be made from metal, and to include five dials, although not PASM dial as previously reported.

Looking over those specs in the image above, we have to say they do look worryingly ordinary, although many of you will find this to be a very capable camera. We guess we will just have to wait and see once those specs have been finalized.

One problem that we can see right away is with the sensor, as it does seem a little on the old side. It would have been a great gesture for Fujifilm to update its sensor, but from those latest rumors, it does seem wishful thinking on our part.