We are amazed at how far South Korea has come, not in the political sense but in their products that they produce. They have two of the biggest consumer electronics companies in the world and also two carmakers. If we were to go back about five to ten years the likes of Kia and Hyundai were not taken seriously, neither were LG or Samsung, but it shows what determination can do. The best way to describe what we are talking about is with the 2012 Hyundai Veloster, which looks more like something a Japanese or European carmaker would’ve produced.

The new car has a great potential and early reviews seem pleasingly positive. For those waiting to get their hands on one of these beautifully designed vehicles you will have to wait until the fall, it will be then that the true test begins, as we will find out if the 2012 Veloster will be able to cut it against its rivals. There are a number of design features that allow this model to stand out, such as that strange door configuration, which we discussed back in January when it appeared at the Detroit Auto Show.

Inside Line has not been able to get their hands on the production model, just an early prototype, so they know that they can only offer an opinion on how it feels to drive and not the fit and finish of the interior and other such things. The test model came with the 1.6-liter engine, which should be one of the most popular in the range, as it offers a decent performance and fuel-economy for this type of vehicle.

There will be a choice of standard manual or six-speed dual-clutch automated manual, the review car was the former. You will see from the images that the car looks very compact, so you will not be surprised that Hyundai has come up with a car that is not too heavy or light. That engine above will produce 138 horsepower and an expected 30-MPG city and 40 mile per gallon on the highway. 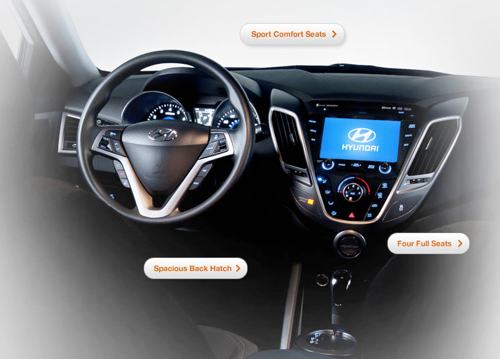 The first test with any new vehicle starts with the driving position, if this is wrong then you will never get to grips with the car itself — no matter how nice it looks. Remember that this is what you would call a sports car lite, so you sit low. You can read the full test drive here, but from what we make out Hyundai still has some work to do; once the bugs have been ironed out that will be when the cars true potential will shine through.