We are not sure what the execs in charge of Microsoft’s Xbox E3 website are playing at, but it looks like they may have spoiled Microsoft’s big surprise for E3 2011. By this we talking about Halo 4, which is now been reported everywhere as a confirmed E3 announcement.

We write this with a slight hint of disappointment, as we’d much rather had seen this announced live at the event by Microsoft themselves – providing the news is true of course.

And it looks like it is indeed real, as reports suggest the information was briefly featured on the US Xbox website, only to be removed shortly afterwards. Check out the screenshot that was captured from the Xbox website courtesy of NowGamer: 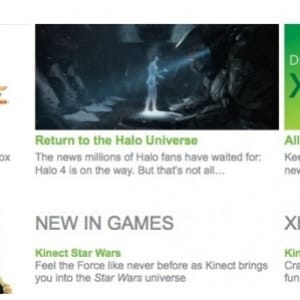 A big question that is now on our minds is – who will be developing the game? Bungie of course have seemingly packed up their bags on the franchise after Halo 3: ODST so is a brand new developer behind Halo 4 or have Bungie come back for one more slice of the pie?

On a side note, the website also reveals leaks for Kinect Star Wars, Dance Central 2, Kinect Sports Season 2 and a remastered Halo: Combat Evolved game, but there’s no doubt that Halo 4 remains the biggest leak.

What is your immediate reaction to this? Overjoyed with excitement, or slightly disappointed that this has crept out before Microsoft’s keynote? We’ll update you with further details later on of course.