New developments in the tablet world see Apple’s iPad finally come up against some decent competition. The Galaxy Tab 2 and the Motorola Xoom are due to hit the market over the next few months, setting the standard for Android Honeycomb.

With Apple dominating the tablet scene, and expecting to continue doing so, these 2 Android 3.0 Honeycomb tablets may just change things. As Flash is supported by both, appealing to gamers and as Apple’s iOS doesn’t, this may give them an advantage. However some game developers still prefer the reliability of the Apple iOS over Android. For more feedback on the Android Honeycomb read what PapayaMobile had to say on Examiner.com.

Strategy analytics predict that in the first half of 2011, Android tablets will reduce the lead that Apple has over the market. Google’s Android software already narrowed the lead, in the fourth quarter of last year, by boosting its share of tablets. 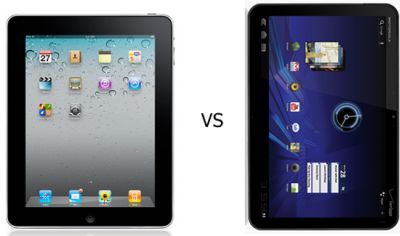 Other features such as Google Maps and YouTube will become much more readily available to users and, through the Android tablets, at a much cheaper price than Apple’s iPad. At the moment you can pick up an iPad for $499 in the U.S and that’s just the 16GB with Wi-Fi, whereas according to the article on Bloomberg, Acer plan on introducing a tablet with Android power in April for about $299.

Which do you prefer Apple or Android? Let us know your thoughts.