The 2014 Porsche Cayman is a very capable car, and for those who tell you that it is just a poor mans 911, then that is just from those who are jealous they cannot afford a Cayman. Let’s not forget that this model still has plenty of performance, it just hides it well, unlike the 2015 Subaru WRX STI.

The STI makes a bold statement because it is brash and says yes I am fast so come and take me on if you dare, which is just what Automobile decided to do. Both these vehicles are great at what they do, and that is covering a huge amount of tarmac in a short amount of time, they just have different ways in advertising this.

We cannot say for certain if this is the dual you have been hoping to see, but the Porsche Cayman vs. Subaru WRX STI drag race does fill us with excitement because of the unknowns. We will not give the result away, although you might already know that by now, but we will tell you that it is closer than you think. 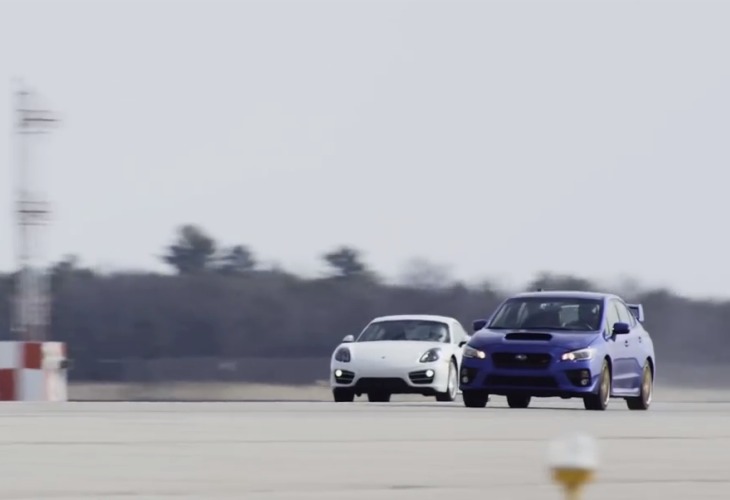 Specs for both vehicles are rather similar, even though they use different engines and technology. Both vehicles make use of flat engines and 6-speed transmissions, but the Subaru has far more power and torque, although the Porsche weighs much less, 300 pounds less.

However, the main difference is how that power is transferred to the tarmac, as the STI has its all-wheel drive system, whereas the Cayman has its power transferred to the rear wheels only, although its mid-engine layout does help with traction.

Watch the video shootout below to see which of the two takes the win.