When you think about hybrid your first thought is the Toyota Prius, but looking at the images and spec details we can tell you that the Porsche 918 RSR is no Prius. How many vehicles with both Gas engine and electric motors do you know can produce 767 horsepower? For those of you who do not now by now, the RSR is a motorsport version of the 918 Spyder hybrid.

So we know by now by looks and power that the RBR is not a Prius, and the same goes for the price tag; it is expected to cost about $600,000 when it goes on sale. We have to wonder if the German automaker might force rivals Ferrari to producing such a fuel-efficient vehicle? Not that we know what the MPG figures are. 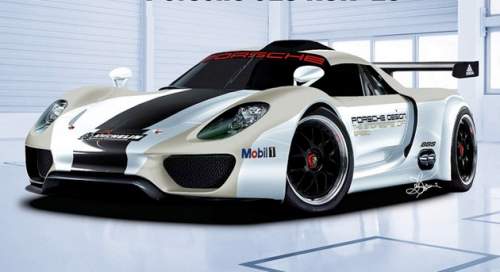 NY Times has learned that the Porsche 918 RSR Hybrid: is powered by a 563 horsepower V8 gasoline engine and a 202BHP electric motor. However, the system used is much the same used in other hybrid vehicles, so relies on kinetic energy to build-up and store to power the electric motor. However, what is different is how that extra power can be called upon to supply an extra burst of energy — much the same as KERS that was used in F1 and is to return for the 2011 season.

Motorward points to the fact that as this is still a concept at the moment, then there could be a few things that will not make it to production. Some of these features that could get lost include the wing doors, the unique air-intake, roof-mounted aerials and much more.