If you are a fan of super cars, we have a treat for you now as it has been confirmed that we now have a new entry in the ‘world’s most expensive car’ category. Not surprisingly, it is once again a Bugatti model, but it is very different to the Veyron that you are used to seeing.

Bugatti are calling their new model the Grand Sport L’Or Blanc, and this version has been specially fitted with porcelain and a caviar tray. The interesting thing about the L’Or Blanc is that it’s not actually meant to be driven on the road, instead it has been produced with art in mind and is designed to compliment any car lovers collection of luxurious autos.

Despite only just being launched, the Bugatti Grand Sport L’Or Blanc has already found its first owner – a car collector from the United Arab Emirates who has just paid a staggering £1.2 million for one. The porcelain elements on the new model have been designed from specialist company KPM, while other notable features include a picnic facility in the center of the vehicle – a pretty bizarre addition we feel, but a feature which adds to the ‘I have the world’s most expensive car, and you don’t’ bragging rights.

Obviously this is a dream car for many of you, and it’s unlikely that the majority of you won’t be able to experience what it feels like to drive the most expensive car in the world, unless you are Cristiano Ronaldo of course. The good news is that we have the next best thing, and that’s plenty of high resolution pictures of the new Bugatti and also a great video for you to enjoy.

These have been provided courtesy of the DailyMail, and it gives you a chance to see just how spectacular the porcelain Bugatti looks in the flesh. Equipped with its new porcelain stylings, the new model bares a striking resemblance to the batmobile on first glance, much more so than the original Bugatti Veyron anyway.

Since this model has been custom made by Bugatti, we unsure just how many more models are going to be produced by the auto maker. Since details on the L’Or Blanc are now spreading around the web like lightning, we bet there will be a list of celebrities and millionaires eager to snap up one for themselves. Hopefully we’ll get to see the UAE businessman show off the new model in greater detail at a later date.

What are your impressions on the Bugatti Grand Sport L’Or Blanc? If you had that kind of money flying around, would you buy one? 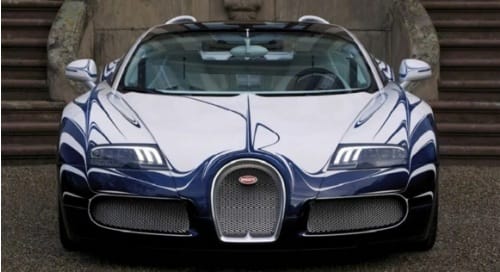 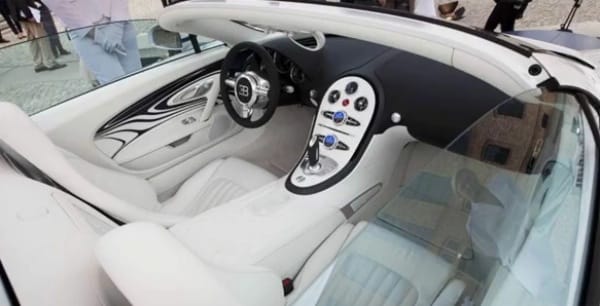