We have some pretty exciting news now for those of you that play Glu’s popular iOS game Bug Village, as we’ve just heard that the app has recently received an update. Besides containing a number of bug fixes, the updated app also includes new items and updated social features.

According to Anthony Usher over at pocketgamer.co.uk, users will now be able to use Apple’s Game Center to view a list of their friends, as well as visit their villages for a daily bonus. The update also provides users with four new houses: L.O.V.E, Strawberry, Honey Stash and Mushroom Hut.

Users will also have the ability to place their piles, houses and decorations anywhere they want. In other words, they can ‘plant’ piles in their village and condos in their gardens. You will now be able to feed your bugs Ice Cream when they become tired. 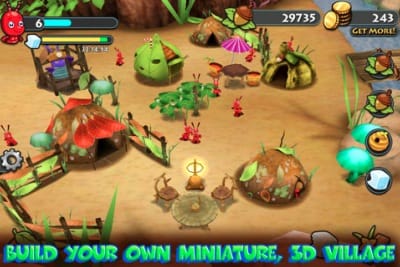 Ice Cream stays in your village for 48 hours, and doubles the time it takes for your creatures to become hungry again. The updated Bug Village app (version 1.1.0) also features new missions and new tasks for each pile, as well as a number of tweaks. Have you previously downloaded the Bug Village iOS game?