The Polaroid PT2-40LED14 40-inch TV specs are a complete mystery right now, and the television came to our attention after a few Product Reviews readers emailed in asking for further information. We cannot find a single Polaroid PT2-40LED14 review and the specs don’t seem to exist right now based on that model, but this is exactly the model being featured by Asda UK for a sale taking place on Friday, November 28th.

We have included a screenshot of the apparent Polaroid 40-inch TV below, which we featured a similar model along with a 32-inch TV in this article. It’s worth pointing out the models we featured were different model numbers and looking at the official manufacturer website doesn’t help, but we have made some ground today for our readers. 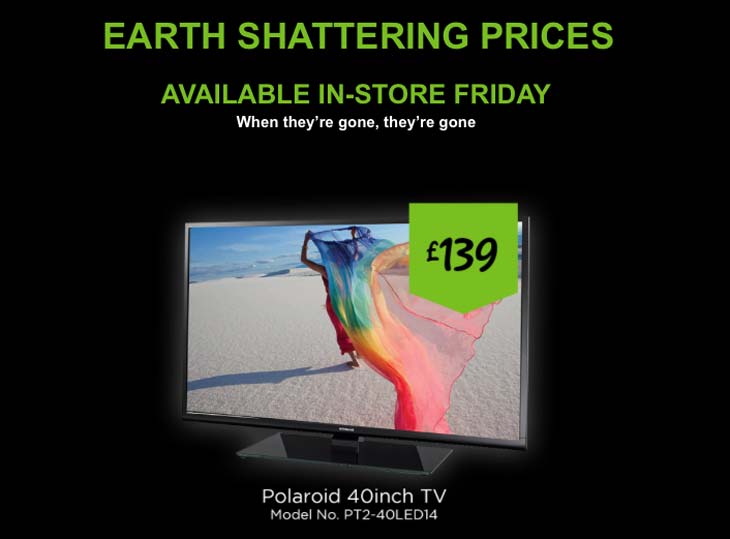 Polaroid PT2-40LED14 specs – there’s one option being sold right now at Asda Direct, which is called the Polaroid 3-40-LED-14 40 in. LED Smart TV. This isn’t exactly the same model number, but considering the current £289 price and the way it’s being sold at Asda UK makes it a possibility for the yet to be revealed Polaroid PT2-40LED14 specs. The sale TV is going to drop to only £139 tomorrow, during what Asda is calling their own Black Friday 2014 sale.

You can see a photo below of the higher priced HDTV and they look very similar. If this ends up being the model, then we are looking at almost half the price being taken off and the specs would include full HD 1080p, an LED-backlit LCD TV, Freeview HD, NICAM digital stereo, 3 HDMI ports, VGA (HD-15) PC input, HDCP Compatible, 2 USB ports, a headphones input, 1 SCART, built-in Wi-Fi, and popular smart apps.

While we cannot yet confirm if this is the exact same TV, looking at the models they are very similar and there’s a good chance this is correct. Of course, this could also be the PT3 and not PT2. It won’t be long before we find out, so check back for an update soon.