Earlier on we gave some solid Pokemon X and Y news, in the form of a brand new gameplay trailer and a look at new Pokemon Pancham, Fletchling, Helioptile and GoGoat in action. Now, we’re pleased to bring you the official box art for the game that will be releasing exclusively on the Nintendo 3DS in October.

The box art won’t feature the starter Pokemon for X and Y, but rather the main two legendary Pokemon that have been revealed so far. If you pick up Pokemon X, you’ll get a lovely box with Xerneas on it – the deer-like Pokemon that has yet to have its type officially revealed.

Alternatively, if you choose to get Pokemon Y, you’ll get a box with the fearsome dragon-like Pokemon Yveltal, rumored to be a dark and flying type Pokemon. As usual, you’ll have the ultimatum of deciding whether to pick up both games, or just get one and aim to collect the other respective Pokemon by trading with a friend. 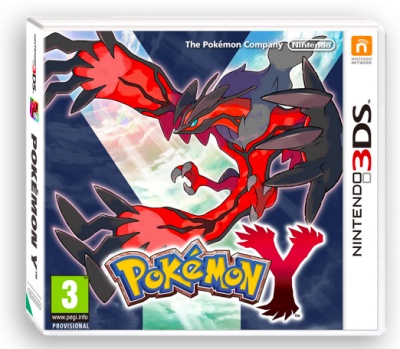 As we revealed in our previous post, Kalos is going to be a massive region as well, with plenty of areas to discover aside from Lumiose City which is the main city inspired by Paris that has been used for the official teasers so far. We still don’t have a solid release date yet for the game, but hopefully Nintendo will be announcing this during E3 2013, which starts in just a few weeks time.

So there we have it – which box art looks the best in your opinion? Will you be buying both games, or plan to just get one? We have to say X looks the more elegant, but Y is obviously the more badass of the two box arts – do you agree?