We are finally starting to see some frequent Pokemon X and Y news come in at last. We previously showed you some of the latest magazine scans from Japan, which unveiled four new Pokemon that will feature in the 3DS title. Now we have a brand new gameplay trailer to show you, which gives you a first look at the new creatures in battle.

To recap, Nintendo and Game Freak recently unveiled the four characters to be Yancham – a fighting type, Yayakoma – a normal/flying type, Elicitel – electric/normal type and GoGoat, a new grass type of Pokemon. Now we have learned that these were actually the Japanese names for the creatures.

In English, these will actually become Pancham, Fletchling and Helioptile respectively, while GoGoat will keep the same name. As we told you recently, GoGoat is also a mount Pokemon, as you’ll be able to ride the creature around on your travels. The new trailer that we have to show you above gives you a look at GoGoat in action, both in mountable form and in battle as well as he performs Horn Leech. 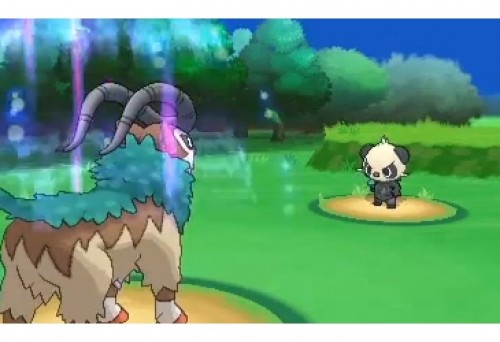 Further on in the video, we also see Pancham, Fletchling and Helioptile in battle as well – pay close attention to some of their impressive animations. We’re also pleased to see that exploration around the different areas looks fantastic as well – diagonal movements at last!

Finally, we can also bring you a full scale map of the Pokemon X and Y Kalos region – click here for a full view courtesy of PokeJungle. Lumiose City (centralized) is just one of the cities featured in the region, there are plenty of areas to visit as you can see in the map.

Look forward to some more details on Pokemon X and Y soon. For now, watch the new gameplay above and discuss your ideas on the other areas shown in the map.