Attention all Pokemon X and Y players now as you have the chance to get your hands on an ultra rare Pokemon that cannot be obtained by normal means. Game Freak has released Fancy Pattern Vivillon with its Hold Hands move on the GTS meaning that it is free for everyone.

This special version of Vivillon has been launched in celebration of the 100 millionth trade on the GTS which is pretty amazing when you think about it.

It’s great to see that this rare Pokemon is finally available by legitimate means, as we had seen some Pokemon X and Y Power Saves users taking advantage of this by getting the Pokemon early.

To get Fancy Vivillon, simply log on to the GTS and obtain your mystery gift via the internet option. Once connected, you just have to head to any Pokemon Center to collect Fancy Pattern Vivillon and then its yours to keep forever. 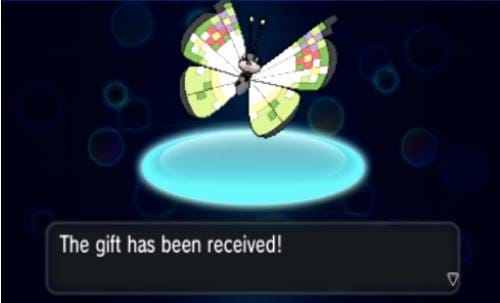 As some of you have noticed though, Fancy Vivillon comes with a new move called Hold Hands, but it doesn’t appear to do anything except spread the message of love between you and an ally.

There is a brand new animation to enjoy though, so that’s something. Have you found any other uses for Hold Hands? Watch the gameplay below showing Hold Hands in action and let us know how you are getting on with Fancy Pattern Vivillon.