We have some more Pokemon X and Y news intel to give you now and it comes in the form of some new official images that Nintendo have unveiled – showing off some of the battle interface that you’ll see when entering a battle in Pokemon X and Y. Some of you may have seen this briefly teased during E3, but now we have a much more clearer look at some of the battle menus for you to enjoy.

You’ll be pleased to hear that there will be some visual improvements than what you are used to seeing from Black and White 2. The same formula will be used, but now Game Freak has decided to provide menu options in the form of oval-shaped commands. These were briefly shown at E3 on stage during the roundtable developer event, but now they are available for viewing on the Nintendo eShop.

In this particular image here, we see an image of Pancham, along with the menu on the secondary screen below, offering the bag, run, Pokemon and fight commands. On the eShop, you should find a similar image, but with Talonflame being shown instead.

Now that we know that the battle interface changes will be minimal, what are your thoughts on this? Did you expect to see a full revamp, or are you happy with how it looks based on this image. If we’re honest, it looks a little uninspiring on first glance, but don’t forget that most of you will be playing with 3D enabled so this could look entirely different when having the game in your hands. 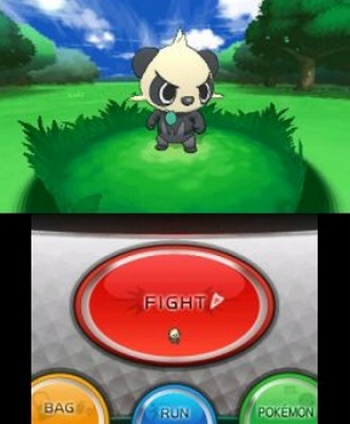 Let’s hope we have some more interface previews to show you soon. The full game is due for a global release on October 12 – are you counting down the days yet?