It has been a while since we last spoke about Pokemon Omega Ruby and Alpha Sapphire, or Pokemon ORAS as fans have shortened it to on social media. The game is due out in November but we can already see that a demo is available and inevitably – Pokemon ORAS demo code giveaways.

At the moment, you need to know that the demo isn’t available on the Nintendo e-Shop. Instead you need to get in with a special code and fortunately there are multiple ways to get hold of one.

Nintendo has detailed this on their website here, listing six different methods to obtain a code. They include things such as getting a code from a cinema showing, local retailer giveaways (such as GameStop) or purchasing some Pokemon games from the Virtual Console. 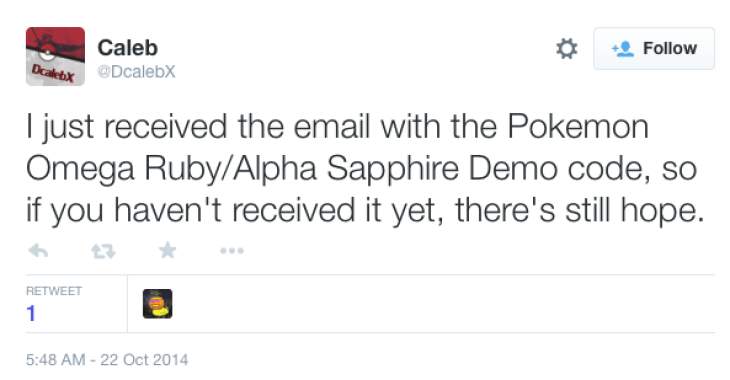 The most popular distribution that we have seen though, is Twitter once again. Users are relying on the generosity of other Pokemon fans who have a code but don’t need it – to share it out with personal giveaways.

We can see that some users are practically begging for codes out of sheer desperation to try the game before the launch at the end of November.

Partly the reason for this, is that Nintendo has confirmed that the demo will allow players to transfer items and also Mega evolutions from the demo to the full game – which is obviously a massive deal for the community.

The question is, how lucky have you been so far in getting a demo code? Feel free to leave your email here if you want to try to get hold of a code, but don’t forget to check Nintendo’s website for official distribution methods.