Earlier on this month we gave you some brief details on one of the new mega evolutions in Pokemon Omega Ruby and Alpha Sapphire. Now, we have some additional details to share with you for mega Sableye, including the creature’s new special move.

Sableye is going to be a Dark, Ghost type of Pokemon and originally appeared in Pokemon Ruby and Sapphire. Now with the new games out at the end of November, Sableye is getting a mega evolution and as you’ve probably seen from early pictures, Sableye will have the ability to hide between a huge red gem after transformation.

Not only that, but Sableye will also benefit from increased defence and special attack stats once in mega form. We can also reveal that Sabyeye’s mega evolution special move will be Magic Bounce – offering the ability of moves that bounce back at their attacker which affect only stats or status conditions. 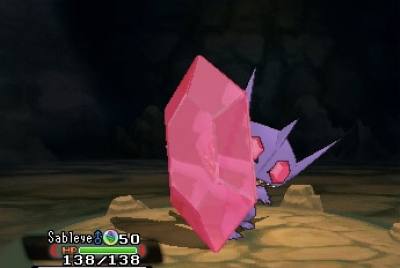 Check out how Sableye will look once mega evolved in Omega Ruby and Alpha Sapphire below – we think it looks very cool and something unique from a mega evolution which we didn’t see in Pokemon X and Y which is nice.

Unfortunately we don’t have the gameplay showing Magic Bounce in action, but hopefully we’ll have that for you next as more reveals are bound to be coming soon.