Anticipation is building nicely for Pokemon Omega Ruby and Alpha Sapphire, with the release date now set for November 21 in the US and November 28 for everyone else in Europe.

We have told you about two mega evolutions that are coming with Mega Sableye and Mega Metagross, but now we switch our attention to Mega Diancie as gamers are desperately trying to find out clues regarding the Pokemon Omega Ruby and Alpha Sapphire Mega Diancie Diancite mega stone.

At this point, it looks like the only way to get Diancie’s mega stone is by finding it in the Hoenn region on Omega Ruby and Alpha Sapphire. This in turn could mean that you first have to obtain the Pokemon in Pokemon X and Y, buy the new game and then transfer Diancie over to X and Y if you want to enjoy it’s Mega form in the Kalos region.

For the people that have asked, Diancie's mega stone diancite can only be obtained in hoenn. You have to trade this event over to ORAS

Game Freak has not released any other details on Mega Diancie yet, other than the fact that it’s special move will be called Magic Bounce. For those asking where the name ‘Diancite’ came from, check out the screenshot below which was captured from the official Mega Sableye reveal. 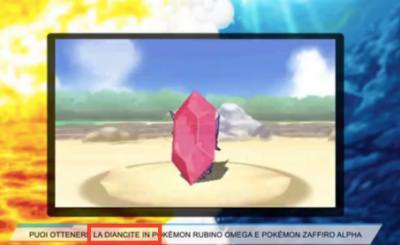 We’ve included an excellent video which goes in depth on possibilities on where the Diancie mega stone location might be. Take a look and let us know your own thoughts on this.

Are you willing to do whatever it takes to get hold of Mega Diancie?