The moment you have all been waiting for has finally arrived! Niantic has just confirmed that the big Gen 2 Pokemon Go update is coming this week!

We have a heads-up for you now on when it is likely due, as the developers gave a bit of clue away which could tell us when to expect the Pokemon Go Gen 2 update to come out in the US and UK. 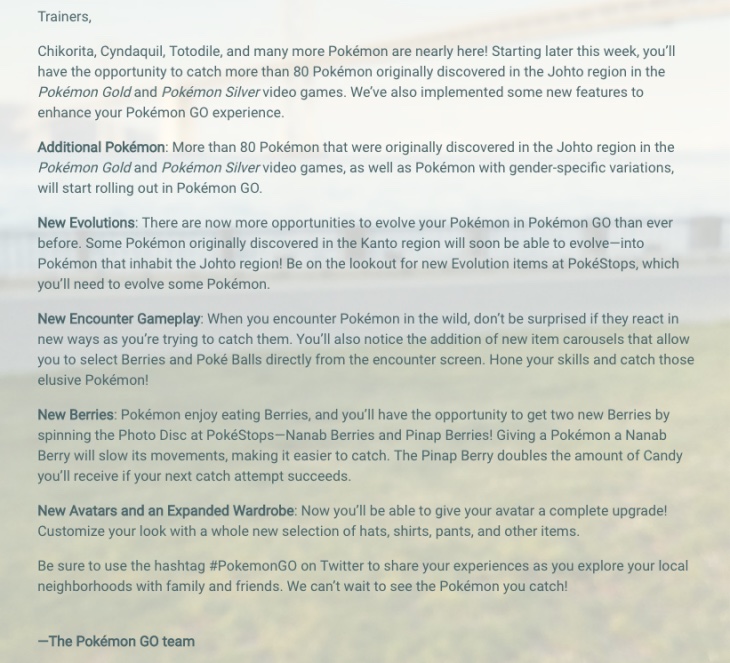 Pay attention to the fact that they say ‘starting later this week’. Given that it is Wednesday at the time of writing, we have a feeling that this is going to be an update that rolls out in time for the weekend making Friday February 17 a prime candidate for launch.

Of course if we’re wrong, we will update the details here as soon as possible. Also remember that Niantic is based in San Francisco, so the Gen 2 Pokemon Go release time for gamers on Eastern and Pacific will cater to you and not those in Europe and Asia.

If the update arrives in the morning, US time then that means late afternoon/early evening for everyone in the UK and in the middle of the night for Asia.

Are you excited about the update finally going live this week? Leave a comment below simply telling which Pokemon from the Johto region out of the 80 do you want to see?