For those of you who owned a Nintendo Gameboy back in the day, you’ll agree that those Pokemon games were some of the finest gameplay experiences you have had and most of you would jump at the chance to relive those classics today.

Unfortunately, it appears that there are certain individuals out there who also want to make a profit out of your Pokemon memories, with Apple’s app store and its millions of users a key target.

You may not have realized it but recently there was a Pokemon Yellow game available to download from the App Store for a mere $0.99. The image descriptions along with the app duped users further into thinking the game was legitimate and as you may expect, tons of users proceeded to download the app straight away thinking that it was the real deal from Nintendo.

The bad news is that the game didn’t even work and crashed upon start-up so not only did Pokemon fanboys get duped by the fake app, they also lost $0.99 and didn’t even get a sniff of a Pokemon game either. What they should have done is spotted the dubious information included with the app, which listed ‘Home of Anime’ and ‘Daniel Burford’ as the seller.

There’s probably even worse cases out there of iOS App Store trickey, but fooling die hard Pokemon fans is probably up there as well. If there’s one game that we would love to see on iOS or Android for that matter it is the original Pokemon Red, Blue and Yellow games.

The news involving the scam has even caused the official Pokemon company to speak out, as they warned fans to be careful of similar scams in the future. Here’s a portion of what they said, courtesy of Macgasm: “Fans who encounter questionable products should report to us immediately so we can keep other fans from falling victim to these scams.”

You may think that the possibility of a Pokemon game featuring on iOS or Android is slim to none anyway since Nintendo have their own platforms and products to look after, but you can’t deny that there would be a huge deal of money to be made if they decided to do it. We’d happily pay a decent amount if they delivered a perfect port to iOS or Android, but we imagine there’s all sorts of licensing shenanigans to get through first.

What are your thoughts on the Pokemon iOS scam – did you see it on the app store? Would you pay good money for a good port as well? 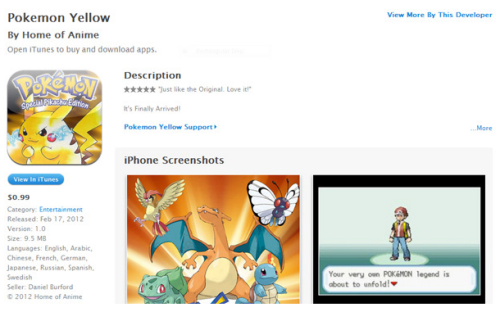