We have some great news for those of you planning to pick up Pokemon Black and White on the Nintendo DS, as it looks like we have a confirmation of starter Pokemon as well as scans of the two Pokemon trainers.

As reported from Siliconera, the new information and pictures have come to us courtesy of Japanese magazine CoroCoro – who also provided previous information on Black and White for us.

According to the scans, the starter pokemon in the game will be Sutaja (grass snake), Pokabu (fire pig) and Mijumaru (sea otter). There are also scans of the two Pokemon trainers – one male and one female, but we don’t know their names yet – although they do appear to look older than previous trainers in games on the DS.

The scans look pretty legit to us, so what are your thoughts on the starter pokemon? Are you happy or not? Hopefully, we’ll be able to bring you a lot more info on them soon.

Which one will you choose? Grass, Fire or the Sea pokemon? 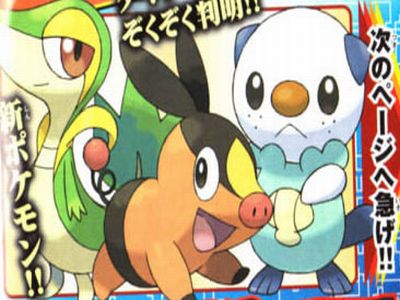