We are just days away from Paul Pogba’s transfer to Manchester United finally being completed. This means that it is going to be very exciting on FIFA 17 Ultimate Team, as we will soon be counting down to Pogba’s FIFA 17 rating which many fans are already debating about now on forums and social media.

Man Utd are going to have an incredible new squad on FIFA 17, with Pogba, Ibrahimovic and Mkhitaryan all in the same team together.

Pogba had an 86 on FIFA 16 FUT of course, but EA are almost certain to upgrade this after another standout season. The only question is by how much, with an 87 or 88 rating predicted by most FIFA fans. 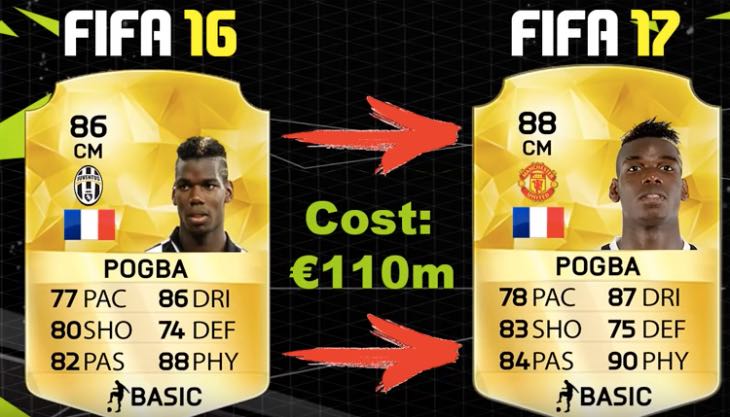 A 89 rating would probably be too high, so 88 would be an upgrade that is justified from FIFA 16, whilst also providing enough room for EA to introduce a series of in-form cards throughout the new season to bring him into the 90s by the time the juicy TOTS cards are out.

Pogba is coming to Man United very soon, so what are your thoughts on seeing him in the Premier League with all new Chemistry opportunities for FIFA 17 FUT?

Is 88 fair or too high? Have your say below!