Teardown specialists iFixit have just completed their breakdown review for the recently released Playstation Move controller for the PS3 console. We have the best bits from their report, and also some cool photos to show you.

As reported from Engadget, the review unsurprisingly makes a lot of comparisons to Nintendo’s WiiMote controller, as iFixit explain how each console uses different methods of locating their respective motion controllers.

While the WiiMote makes use of Infra Red sensors and emitters to operate, Sony’s Playstation Move uses a collection of processors, accelerometers, a vibrating motor, bluetooth transmitter and also a MEMS (Micro-Electro-Mechanical Systems) compass. 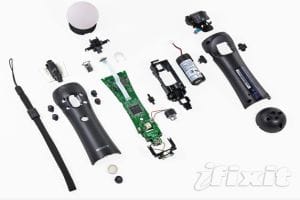 Built in LED lights allow for the color-changing sphere located at the top of the controller and the pad can also move in 3D space as shown off at E3.

If you’re interested in hearing more on what makes the PS move controller tick, then head over to iFixit’s full teardown here.