It’s fair to say that a lot of people have still yet to jump aboard the PlayStation All-Stars Battle Royale bandwagon. While some have praised Sony and developers Superbot for bringing a cross-franchise 2D brawler to the PS3, others believe that the game only serves as a blatant imitation of Nintendo’s popular Super Smash Bros franchise.

From our point of view, we can’t wait for the game. We think the game is looking great and should have been on the PS3 a long time ago, but unfortunately it appears that one high profile games developer doesn’t feel the same. Hideki Kamiya is a big name in Japan having worked on the original Devil May Cry and first Resident Evil game when employed by Capcom.

He now applies his trade with Platinum Games who have Metal Gear Solid: Revengeance on the way, but he’s voiced his disapproval of PlayStation All-Stars, by calling the game a ‘rip-off’ on Twitter. He was hosting a Q&A session on the site with his followers and certainly didn’t hold back when fans asked him for his opinion. 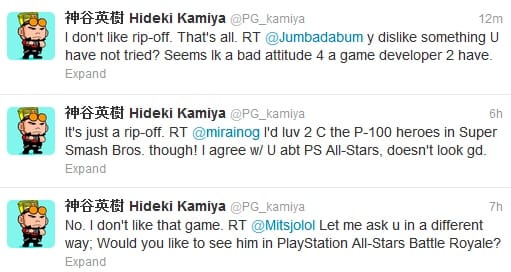 Aside from calling the game a rip-off, he also stated that he just ‘doesn’t like the game’ and distanced himself from suggestions that some characters from PS2 game Okami and Bayonetta may find their way inside the game – two of his well known projects in the past.

Amusingly, a further Tweet also showed that he wasn’t really bothered about the criticism he was receiving after he called All-Stars a rip-off. It does seem a little ironic however that the timing of his comments come, when he is currently developing a game called Project P-100 for the Nintendo Wii U.

What are your thoughts on this? Do you think his Tweet sums up what you have been thinking all along in that All-Stars is just a Smash Bros rip-off? Or do you think that he has got this completely wrong and needs to try the game first before judging?