Sony is hosting some rather tempting PlayStation Store discounts for US and UK gamers now, all in celebration of the PlayStation 20th Anniversary.

We can tell you that the sales for each region are different though, so we now have a heads-up on what you’ll be able to get your hands on.

If you live in Europe, you can now get a 29% discount on The Witcher 3 until September 16. Other notable deals include 30% off Battlefield Premium, while PS3 users can get a whopping 66% discount on GTA V which is rather good.

Across the shore, US owners will get a different batch of deals. The highlight of these include Final Fantasy XIV: A Realm Reborn Collectors Edition for $29.99 instead of $39.99 for PS Plus members. 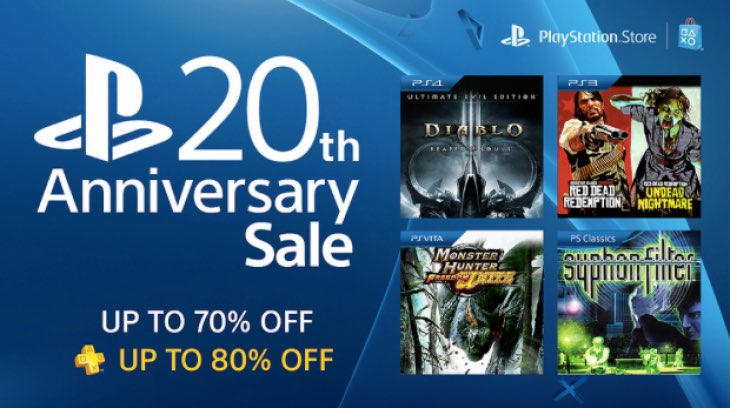 There’s also Diablo III: Reaper Of Souls — Ultimate Evil Edition for $29.39 on PS Plus, while there’s also a great discount to be had on Call Of Duty: Advanced Warfare — Digital Pro Edition too at just $63.99 for PS Plus members instead of $99.99.

The US deals will be available until September 14 so you don’t have long to make up your mind on whether they are worth a purchase.

The full list of Playstation Store discounts for US are here, while UK gamers can head to the EU blog here to see their games – truth be told, US are getting the better sales as usual so no surprises there.

Let us know if any of the Playstation 20th Anniversary sales interest you.