The Samsung Galaxy S II is undoubtedly one of the most successful smartphones which we have seen released in 2011, however we are already beginning to speculate about its successor, forget about that for now as today can reveal that a pink version of the S II has been unveiled.

Prior to today we have only seen black or white variants, however a recent post over at SammyHub gives us our first-ever glimpse of a pink variant – we are sure that a lot of our female readers will like the look of it.

We have embedded an image below which shows the new color from many different angles. Samsung will be hoping that this new variant will increase S II sales and we think that if it comes to the right carriers at the right price it will attract quite a lot of interest. Sadly at the moment we don’t even know if it is headed to North America and Europe – therefore we will have to keep you posted when we hear more. 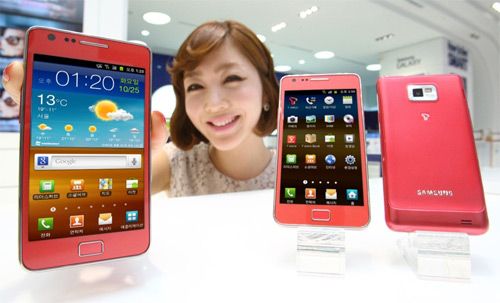 One smartphone which will be a direct competitor to this is the Nokia Lumia 800, it is quite similar to the S II in terms of capabilities and also available in pink – however the main difference is the fact that the S II runs Android whilst the Lumia 800 runs Windows Phone 7.

The overall reaction to this new pink model has been pretty positive so far and we think that a female-centric design is a great idea. When my partner points our a car she likes it is often based heavily on its color and the same can be said for smartphone, in fact earlier this year I showed her the S II and she didn’t like it, I just showed her the pink variant and told me she loves it!

Do you like the pink Samsung Galaxy S II?