Recently we revealed that the Samsung Galaxy Tab could be offered by AT&T, Verizon and Sprint, at the time of our previous post we had no solid evidence, however a photo recently showed up on SlashGear appearing to show an AT&T branded Samsung Galaxy Tab.

We have embedded the photo at the end of this post, it clearly shows the back of the Samsung Galaxy Tab with an AT&T logo on it, we are reliably informed that AT&T will treat the Galaxy Tab as a flagship device this holiday season.

We have had no confirmation of other carriers offering the Galaxy Tab yet, however many believe that it will come to multiple carriers just like the Samsung Galaxy S smartphone did, I guess we will find out whether this is true pretty soon.

With AT&T seemingly soon to be offering a rival to the iPad it will be interesting to see how things pan out, could the Samsung Galaxy Tab kill off the iPad hype?

At the moment we still must treat this as a rumor, however in my opinion this photo pretty much confirms the AT&T release, what carrier would you prefer? 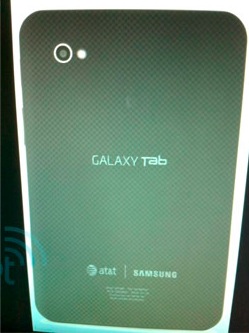