Another TV brand that is popular in the UK during the busy sales period, comes from Philips which is often sold by retailers such as Argos. One model which we wanted to give you some information about is the the Philips 49PUS6401 49 Inch 4K Ultra HD Ambilight Smart TV.

You may not be aware of it, but Philips are also offering 4K television sets and this one offers a 3840 x 2160 resolution, along with 1000 Motion Rate, 4 HDMI ports, 3 USB input, WiFi, DLNA and Micro Dimming technology.

The Ambilight feature attempts to offer an immersive experience by providing a unique lighting system that you can toggle yourself to suit your needs. 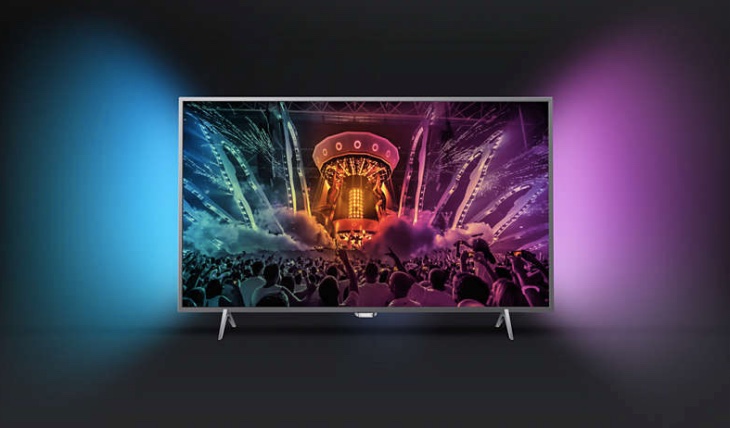 This TV also runs on the Android OS and comes with the Google Play Movies and Google Play Music apps built-in, along with the usual lineup of Netflix, BBC iPlayer, YouTube and other on demand favourites.

One important thing we do need to point out though, is that this TV does indeed have HDR features included. We have noticed that on the Argos listing, HDR is nowhere to be seen as an advertised feature which we found very odd.

However according to the official product listing for the model, the Philips 49pus6401 does have HDR Plus making it compatible with the PS4 Pro and Xbox One S gaming consoles.

We know that there is also a special ‘low latency HDR mode’ on this TV for gaming, so while it may not be true HDR support that you would find on more expensive models, it is good that Philips is still offering a workaround for those wanting to buy this specifically for the new consoles.

Some other good news for you: The Philips 49pus6401 has HDCP 2.2 support on HDMI port 1 and 2, while a recent software update enables the HDR features and also 4K streaming for both Netflix and Amazon Prime content.

For detailed Philips 49pus6401 specs, you can check out this page while you’ll also find the manual download here for those that need that.

You’ll be pleased to hear that the Philips 49pus6401 user reviews are very good so far, on the Philips page it has a 4.5/5 rating at the time of writing, while those buying directly from Argos have given it a 4.6/5 rating with over 460 reviews left.

Are you interested in this TV? You can buy the Philips 49pus6401 Argos now with a special ‘Cyber Monday’ price of £444 whilst stocks last. Let us know your thoughts on it and if you have any other questions about its features that you need us to answer.