Manchester United defender Phil Jones is often the subject of cruel, but amusing topics on social media. Whilst not going into details on the Phil Jones ‘face’ jokes that you all love to spread in the name of ‘banter’, we do have something funny to bring you from the player himself.

Like so many other Premiership players, it looks like Phil Jones is a big fan of FIFA 15 from EA. So much of a fan, is that he has decided to troll the social media world by dreaming up an amazing Phil Jones 95 rating on FIFA 15 Ultimate Team.

You can see from the image directly below that it includes the picture showing his new imaginary rating in the game. Just to put that into context, it would not only make Phil Jones the highest rated defender in the game beating Real Madrid star Sergio Ramos, but also the highest rated player in FIFA 15 period toppling Ronaldo and Messi. 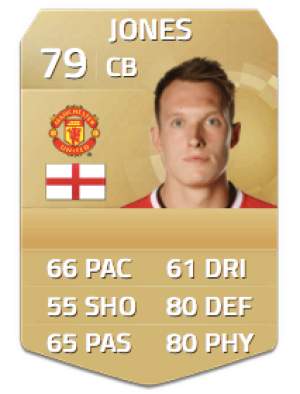 Obviously, this image is a joke and most FIFA 15 players appear to have seen the funny side of it. We can also see that EA themselves have retweeted the image and shared it on their own wall, so it definitely caught the attention.

Elsewhere we see feedback from other fans who actually think Phil Jones should be rated around 45 which is a little bit harsh.

Enjoy this little dose of amusement and let us know if you think a 79 official rating for Phil Jones in FIFA 15 is reasonable or if you think he should be higher.