While the Peugeot 308 R Hybrid is officially referred to as a concept for now, there is no getting around the fact that based on the most recent review, there have been urges for this vehicle to finally come out of its concept form and go into production. We are not saying it will be produced in high numbers, as this model would need a limited run because its projected high price of possibly around £50,000.

It’s clear to see that this Peugeot 308 R Hybrid is even more outrageous than any Ford Focus, and this is because its marriage of petrol engine and electric motor and batteries to give it a combined power output of 500 horsepower.

Both of these power units provide power differently, with the electric motor helping to fill the gaps left by the combustion engine. 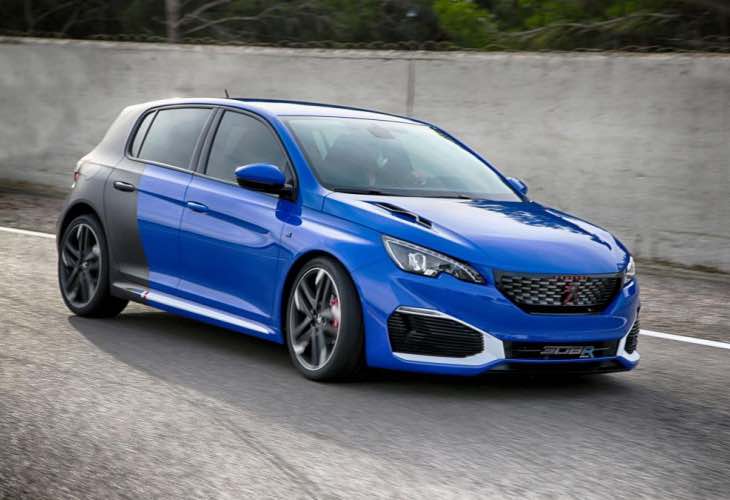 Most of the Peugeot 308 R Hybrid reviews have been limited by the way they were not able to offer anything constructive due to driving it too slow because of it being a concept model.

However, this was no such issue for AutoExpress, as they were allowed to go for it and test the 308 R Hybrid on a track. They had one simple message after the test on the race track, and that is, “without hesitation; Peugeot should build this car, and build it soon.”

AutoExpress believes this model to be a game-changer because it pretty much crushes the competition, such as the Honda Civic Type R and the Audi RS3.

Its various driving modes allow the electric motor to deliver power differently, such as full electric, hybrid and hybrid sport – the latter being very similar to how an F1 hybrid system works.

The reviews says that the Peugeot 308 R Hybrid is the complete package for a hot-hatch, as it delivers a huge amount of power, while also combining decent handling and steering. However, the only issue is whether Peugeot will ever build the thing.