Following on from the sale of 12p Thorpe Park tickets earlier today, we can see that there has been a huge uproar from consumers who are angry with Thorpe Park 12p tickets going on sale before 10am as initially advertised.

We have been covering this event all week on PR and when the time actually came, Thorpe Park managed to infuriate consumers even more. As a result, we can see that a Thorpe Park petition has now been set up with demands for the company to compensate for the earlier sale time which caught thousands off guard.

You can see an example of the petition below, which has already managed to attract over 100 signatures within a few hours of being set up. 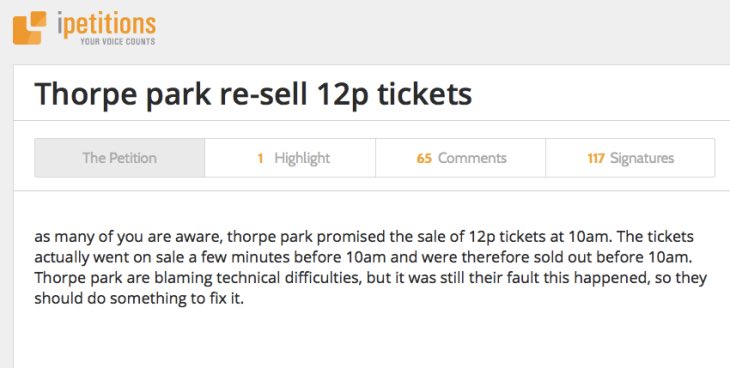 With over 1800 12p tickets sold within a minute, you can understand the frustration when consumers were expecting the sale to start exactly as advertised beforehand to give everyone a fair chance of trying to win one.

This didn’t happen though and we can now see that Thorpe Park has a difficult job on their hands trying to rectify the situation.

Were you caught up in the Thorpe Park website problems with the 12p tickets going live earlier than advertised? Give us your thoughts below and we’ll update this article with a statement from Thorpe Park as we get it.