If you are playing PES 2016 right now, the only thing that will be on your mind is – what on earth are Konami playing at with regards to the delayed PES 2016 roster update release time?

A PES 2016 patch for squad updates has not happened since launch, which means that die hard players are waiting for the correct and up-to-date squads before starting their Master League campaign.

The most frustrating aspect is that Konami hasn’t given a specific reason why it is taking so long to update the PES 2016 teams, especially when EA do it for FIFA 16 frequently without fanfare. 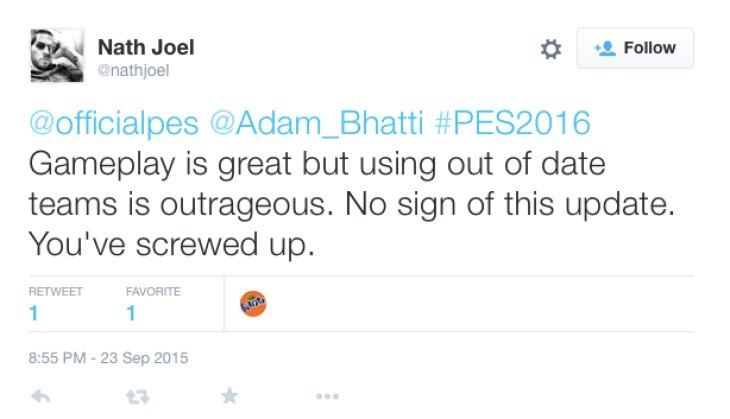 We can bring you some feedback on this issue now, both from fans who are obviously a little unhappy that this is the biggest talking point since they decided to buy PES 2016 over FIFA 16 and also the official word from Konami.

A statement from Konami on when the PES 2016 teams will be updated can be seen in full below. They have said that their priority is to make sure that online is functioning properly – but then shouldn’t they delegate a few members of their team specifically to ensure that all teams and PES 2016 rosters are updated at the end of every week – taking into account injures, suspensions and in-form players etc?

We’ve also added Konami’s latest reply from September 18 on the matter, which includes a crucial heads-up that news on the PES 2016 transfer update will come at some point next week – so make sure you are aware of that.

Once that update comes, we’re guessing that it will be the moment when we finally get the PES 2016 roster update release date – which hopefully won’t take much longer. 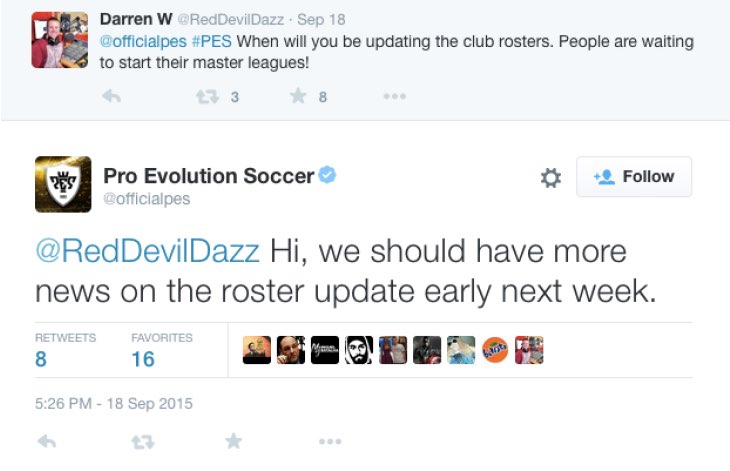 As someone who decided to give PES 2016 a chance this year over FIFA 16, are you disappointed that it is taken so long to provide a simple update to the rosters?

Let us know your thoughts on this and what roster changes specifically you are waiting for Konami to implement.

Update: Konami has now confirmed when the PES 2016 Roster update is out with Data Pack 1. However, it’s not good news – find out the details here.