We just wanted to give PES 2016 owners a reminder as a heads-up that we are almost ready for the highly anticipated PES 2016 Data Pack 3 release time.

This will not only add some great content into the game for free such as Winter Transfers, Kits and other goodies but also the PES 2016 Euro 2016 DLC as well.

Just to clarify, this content will be free for those that already own a copy of the game. However, you will also be able to buy PES 2016 Euro 2016 separately and pre-orders are already live now. 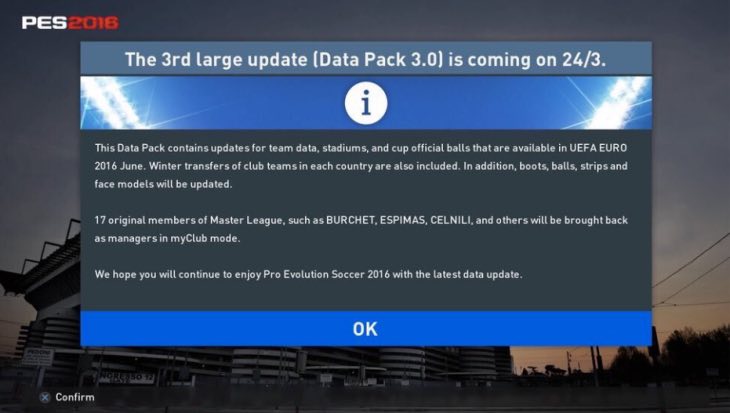 Naturally, many of you will want to know what time does Data Pack 3.0 come out for PES 2016 on March 24. Unfortunately, it looks like Konami are not stating an exact time but we’ll keep you updated here nevertheless.

You may also want to keep an eye on the official PES Twitter page as we can see that they are now regularly Tweeting teaser messages in the build up to Data Pack 3 going live.

Are you excited about this content landing for free – is PES 2016 better than FIFA 16 in your eyes?