It was back in October that we last brought you news about DLC for the popular football video game Pro Evolution Soccer 2011 (or PES 2011 as it’s also known). We now have news of another DLC pack that will be arriving next week, which won’t cost you anything!!

According to a recent article by Tamoor Hussain at computerandvideogames.com, Konami has just announced that they will be releasing a free DLC pack for the PES 2011 game on December 21st, which will be available for PlayStation 3, Xbox 360 and PC gamers. 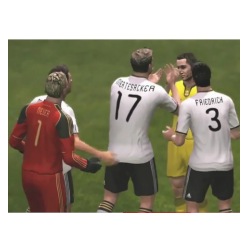 The upcoming pack will provide updates for 12 kits for teams including several French clubs and the Irish national team. The downloadable content will also feature the addition of ten new licensed boot types from names such as Umbro, Puma, Mizuno and Adidas.

It appears that the PS3 version of PES 2011 will be receiving an update next week as well, which is said to also be arriving on December 21st. According to Christopher Rick at gamersdailynews.com, the new update will include a number of gameplay improvements.

What do you think of the new DLC pack that will be available for download next week?