If you didn’t know already, some bad news has landed this week with the official confirmation of a Persona 5 delay. We now have a statement from Atlus to share with you and also some of your reaction on how you have been coping with the setback.

Persona’s 5 release date was originally set for sometime in 2015 but after minimal reveals some fans had been expecting the worse.

Now Atlus has said that the game is coming out Summer 2016 instead on both PS4 and PS3. That means we have the best part of another year to wait for this glorious game as painstaking as that is to accept.

Usually with delays, developers would be able to get the game out early the following year, but Atlus has said straight away point blank that Summer 2016 is the new release schedule. 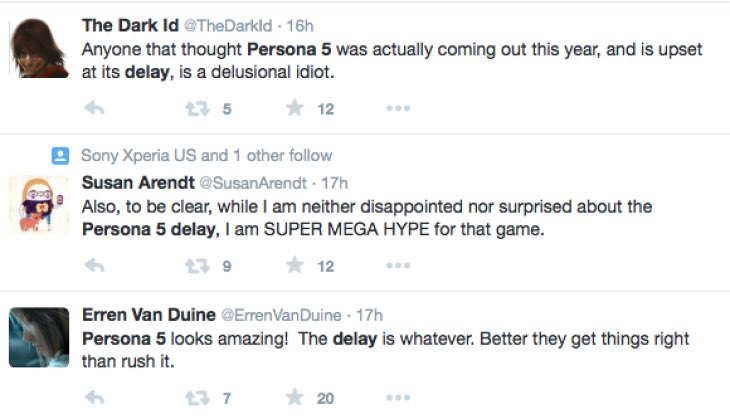 You can read the full press release over at PersonaCentral. Altus has basically said that the game cannot be rushed or taken lightly and the main reason for the delay is that they want to live up to the expectation of the fans.

As for the fan reaction so far, just take a look at some of the feedback left on Twitter over the last 24 hours.

Moving on to some good news at least, we do have a brand new Persona 5 trailer from TGS for you to enjoy. Take a look at that and give us your personal reaction to the delay.

Are you upset that you have to wait another year to play the game or not?