The Pebble smartwatch has just received firmware 2.8 and the update went live with its notes this week. The main feature within the Pebble 2.8 firmware update notes is expanded language support for notifications, which add a long list of new languages to better support the diverse user base.

We have included a screenshot of the Pebble firmware 2.8 update notes below, although the changelog isn’t that long, so it basically details what new languages have been added. It’s also worth mentioning that there’s stability improvements and bug fixes, as well within this download.

While the developers haven’t been clear about what got fixed within this round of bug fixes, you can be sure that you’ll always get some sort of stability upgrade with each firmware update. 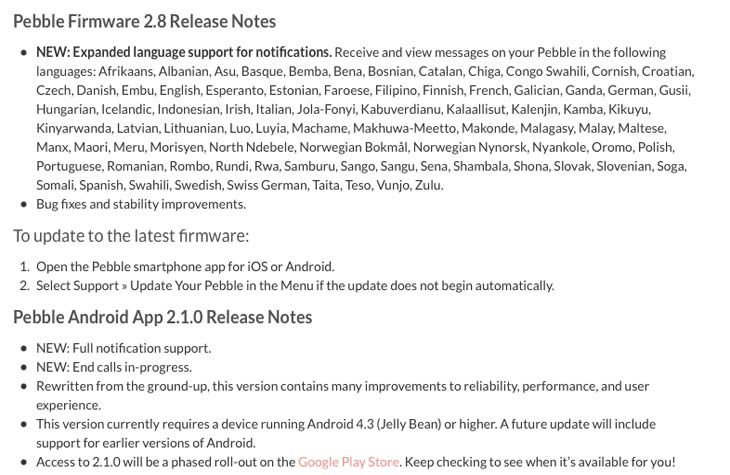 The notes above also explain how to update to the latest firmware from within its iOS and Android app. Speaking about the app, this received an update as well within version 2.1.0 for Android and 2.5.2 for iOS. You can see details on these changes above and below.

After the latest update, it has paved the way for even more languages to be added in the near future. This will mean more countries will be support by Pebble in the coming months. Have you downloaded the latest updates to Pebble’s firmware and its apps? If so, did everything install without problems?