Those of you who are thinking of a PC upgrade are now facing dilemmas, as they now have a choice of seven new AMD FX processors, which are due for release shortly. You not only have to choose which of the seven fits in with your needs, but if you want to shift away from Intel and their Sandy Bridge processors? AMD has been lagging behind their rival, but offering a CPU with 8-cores should change that — well if the price guide is right?

There is an AMD FX processor for all budgets here, and the top of the range FX-8150 with its $245 price tag is $55 cheaper than the Core i7-2600. According to AMD the both are very similar in benchmark tests, but they would say that. The base speed of said CPU is 3.6GHz, and according to Engadget can be over-clocked to 4.8GHz, which to us is astonishing.

Those of you with an AM3+ motherboard will need to do some research first to see what they should upgrade to. There are so many factors involved, and it is not always down to money. Why would you want to pay a huge amount of money for a certain AMD FX CPU, if you will never use it to its full potential?

From the seven different models, there will be three different variants, 8-cores, 6-cores and 4-cores. The former two will be here in days, but there is no confirmed release date for the latter model. If you are a gamer then you will want to go with the eight-core option, but if you are not, then the six-core should suffice.

Take a look at this AMD FX CPU lineup chart to make your choice. 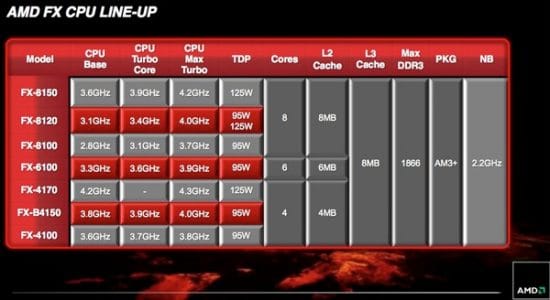