A really clever application has recently been released to the App Store which lets users turn their iPhone into a 3D camera. Panorama4D is available for owners of the iPhone 4 and 3GS, iPad 2 and iPod Touch 4G.

Released by OWLAB, Panorama 4D is a photography application which lets users take stereoscopic 3D images with your camera even though your device only has a 2D camera.

To use you first have to extend your arms and rotate to the left side until you hit the marker. Then the application starts recording the video as you go in the other direction and stop once the other marker is hit.

The app will then analyze and align the frames to create ten stereoscopic images of what you were videoing at different angles. Then you are ready to don your anaglyph 3D glasses to admire your handy work. 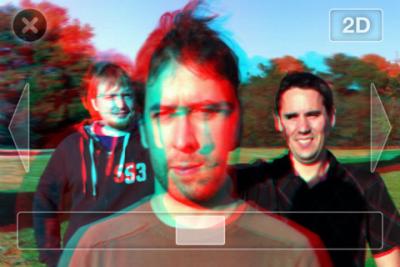 Users can share their creations via email, Facebook and Twitter with one simple click. Unfortunately glasses are not included with the app but are pretty inexpensive. You are aided with step-by-step on screen instruction as you go.