Those of you who are looking for a cheap, but stylish smartphone this Summer may want to pay attention to the Panasonic P31. It’s a smartphone that has become very popular in India, leading some to compare to it with the equally as popular Motorola Moto G.

The big difference between the Panasonic P31 Vs Moto G, is that Motorola’s device is much more friendly in terms of availability, with consumers in the US able to pick one up now on the cheap compared to the Panasonic P31 which is still generally released with the Indian market in mind.

Panasonic may want to think about releasing their P31 in the States though as it appears to have gone down a hit in just two months since launch. Hardware specs are decent enough, with the P31 offering a 1.3GHz quad-core processor, 1GB of RAM, MicroSD support and an 8 megapixel camera with LED flash.

The Moto G on the other hand supports a 1.2Ghz Qualcomm Snapdragon 400 quad-core processor, with also 1GB of RAM, but with no MicroSD support and just a 5 megapixel camera.

Key Factors: Storage is an important area for all consumers and there are some interesting discrepancies between the two. The Panasonic P31 only offers a dismal 4GB of internal memory, while the Moto G offers 8GB. 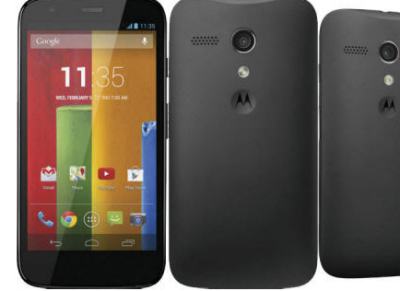 Another massive difference between the two is that the P31 ships with Jelly Bean, while the Moto G can run Android 4.4.2 Kitkat straight out of the box – which may be a big deal to some of you.

It’s clear that hardware specs are not amazing on both devices, but this could be overlooked if price is the main factor for you. Don’t forget that the Panasonic P series are still very popular wherever it has gone on sale, regardless of specs – so some consumers don’t need to be blown over.

If you have been keeping a close eye on both devices, let us know which one currently takes your preference, in terms of price, performance and specs.

Does the Panasonic P31 already need a hardware upgrade in your opinion?