We would have thought that Panasonic would have made all their announcements during CES; se we were surprised to learn that they have unveiled four new point-and-shoot Lumix cameras. So in the space of a a few weeks the electronics makers has launched 12 new models

The four models are as follows: Panasonic Lumix ZS10, ZS8, FX78 and finally the TS3. Engadget has been taking a closer look at each model, as well as offering a press release for them. It is the first two models that are the most powerful of the four, which means that they will be more expensive as well.

For us it is the DMC-ZS10 that stands out the most, as it not only offers14.1 megapixel but also a 16x optical zoom lens as well. However, it is the 3D Photo that could be the making of this model — something that other cameras have already started to implement. JVC knows just how important this new technology is, which is why their GS-TD1 is the first Full HD 3D camcorder. 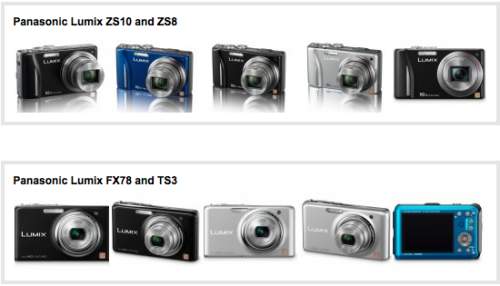 CNET News seems to have picked what they believe is the best Panasonic camera to be seen during the Consumer Electronics Show, and that is the DMC-FT3. This is a tough little device that will handle most of what you or I would throw at it. Maybe once you get it you can give it a go and let us know just how tough this little cookie is?